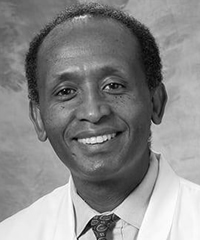 Girma Tefera, MD, is Chairman of the Board of Directors of Ethio-American Doctors Group, Inc. Dr. Tefera joined the American College of Surgeons (ACS) Division of Member Services in February 2015 as the new Medical Director of Operation Giving Back (OGB). OGB is a comprehensive resource that helps surgeons find volunteer opportunities worldwide that match their expertise and interests.

Dr. Tefera specializes in minimally invasive vascular interventions, including stent grafts for complex aortic aneurysm treatment, as well as percutaneous treatments of carotid arteries and vascular diseases of the lower extremity. In pursuing a surgical career, Dr. Tefera took the road less traveled. He grew up in Chencha, a small town of fewer than 5,000 people in southern Ethiopia, as one of seven children. At the age of 12, he left home to enroll in high school 22 miles away, and at age 15, he was admitted to a college preparatory school 400 miles from home. After graduating at the top of his class, he was one of six Ethiopian students offered a full scholarship at the University of Pisa Medical School, Italy. After graduating in 1982, he returned to war-torn Ethiopia, where he worked for five years as a general practitioner, primarily in the Armed Forces General Hospital, department of surgery, Addis Ababa, Ethiopia, and Asmara, Eritrea.

These experiences with treating injuries on the battlefield strengthened his surgical skills as well as his resolve as a surgeon. As war continued to ravage his homeland, the Ethiopian government resisted his efforts to leave. In 1988, he seized an opportunity for a surgical residency at Krankenhouse Friedrickstadt in Dresden, East Germany. After the Berlin Wall fell in 1989, he continued with his surgical training, where he gained a general surgery certification in 1992. He emigrated to the U.S., where he sought refuge from the conflicts of his homeland. This move proved to be deeply challenging. “It is hard to relate the difficulties a foreign graduate faces to get in to surgical residency,” he said.

He persisted and was admitted into a residency program at Howard University Hospital, Washington, DC, and in 1999, began a vascular surgery fellowship at the UW School of Medicine and Public Health, followed by his work as a faculty member. Dr. Tefera took the reins of a program that in 2011 honored him with the ACS Surgical Volunteerism Award. OGB, in conjunction with the ACS Board of Governors, oversees the annual award that pays tribute to one Fellow for exceptional volunteer work, either domestically or abroad. The award to Dr. Tefera recognized his significant contributions to improving the delivery of surgical and emergency care in Ethiopia.

He was acknowledged for the strategic partnerships he developed to strengthen health care delivery, focused on systems development and building workforce capacity to train local partners. In 2010, Dr. Tefera and his local partners celebrated the opening of an emergency medical training center and the start of a training program for emergency medical specialists at Addis Ababa University. The center has since trained more than 4,000 health care professionals in medical emergency care. In the past five years, more than 100 volunteers from Wisconsin and other U.S. partner schools have traveled to Ethiopia, and more than 15 residents have graduated in emergency medical care.

The partnership has created a foundation for developing comprehensive trauma and emergency care for the entire country. In his new role, Dr. Tefera will turn his attention to the range of global surgical programs offered at the ACS Clinical Congress. He also will coordinate the College’s response to disasters worldwide, develop new programs and opportunities for surgeon volunteers, communicate the work of OGB, and increase College participation and recognition among other similar global organizations. In addition, he will oversee a redesign of the OGB website to match members’ needs with volunteer opportunities.

We use cookies on our website to give you the most relevant experience by remembering your preferences and repeat visits. By clicking “Accept All”, you consent to the use of ALL the cookies. However, you may visit "Cookie Settings" to provide a controlled consent.
Cookie SettingsAccept All
Manage consent

This website uses cookies to improve your experience while you navigate through the website. Out of these, the cookies that are categorized as necessary are stored on your browser as they are essential for the working of basic functionalities of the website. We also use third-party cookies that help us analyze and understand how you use this website. These cookies will be stored in your browser only with your consent. You also have the option to opt-out of these cookies. But opting out of some of these cookies may affect your browsing experience.
Necessary Always Enabled
Necessary cookies are absolutely essential for the website to function properly. This category only includes cookies that ensures basic functionalities and security features of the website. These cookies do not store any personal information.
Non-necessary
Any cookies that may not be particularly necessary for the website to function and is used specifically to collect user personal data via analytics, ads, other embedded contents are termed as non-necessary cookies. It is mandatory to procure user consent prior to running these cookies on your website.
SAVE & ACCEPT